The first month of summer has unofficially begun and it is by far the most hectic and jam-packed of my year. Mainly, it’s because I help coach softball and when we aren’t practicing we’re playing. On top of that, I’ve been trying to squeeze out the last book in my Legend of Carter Gabel series for months, it seems.

Sadly, I tried to commit and stick to a release date that is not going to work out. Going off of many different, albeit loose, equations, my first round of edits will most likely reach me at the last possible minute, which is this Friday. I have a tournament this weekend out of town… yes, with that math and possibly two more rounds of editing, formatting and getting the final cover layout for paperback. June 9th is far too close for me to assume I’ll have a finished copy ready by next Monday.

Sorry, I was pretty good at math, but managing the Indie aspect alone in this chaos between the PayPal incident, softball, my daughter’s first prom and a lot of little things crammed in-between, I feel like I’ve let a lot of waiting people down. Amazon has punished me for my lack of judgement by saying I can’t use pre-order for a year now… I guess I’m grounded?

So, the best I can do is say the release is moved now to 6/30/17. If it’s done sooner, trust me, you’ll get it sooner. I hate to put this off one second let alone three weeks, but I can’t change it again and if something catastrophic put the placeholder out instead of the finished MS, you’d be equally disappointed.

But there’s some good news!

I’m working on a new story!!

It’s called American Red. It’s a nod to horror and mystery and it involves two young brothers who are possessed by demons. These demons tempt them to use powers they now possess at the risk of letting the demons control more of their bodies. When an apparent kidnapping takes place at their school, the boys have to decide whether or not using those powers is worth the risk.

I’m currently posting it out on WattPad as I finish each chapter. So, it’s unrefined, but I’m pretty happy so far. Please give it a shot, share it, share whatever you think about it! I’ll keep posting chapters out there as long as I stay ranked, but my ranking is dropping so I need your help!

Come have a look-see as we wait for the last in the trilogy to makes it’s way here! 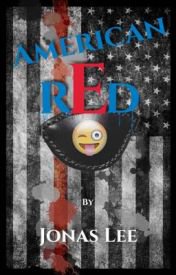