A friend of mine is approaching the birth of her first book baby. This is as close to a gender surprise most authors will experience, BUT cover reveals are sacred and I am glad to be a part of it! Please go have a look and let her know how many copies you plan on purchasing.

Author Kate M. Colby is thrilled to reveal the cover for her debut novel, The Cogsmith’s Daughter (Desertera #1). Add the novel to your “to-read” list on Goodreads today, and check back on Kate’s website, http://www.KateMColby.com, for more exciting news later this week! 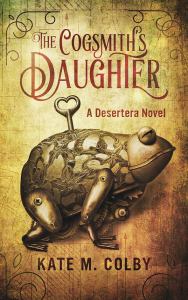 WHEN THE STEAM-POWERED WORLD DRIES UP…

Two-hundred years ago, the steam-powered world experienced an apocalyptic flood. When the waters dried up, the survivors settled around their steamship in a wasteland they named Desertera. Believing the flood and drought were caused by a scorned goddess, the monarchs demanded execution for anyone who commits the unforgivable sin—adultery.

ONE KING RULES WITH ABSOLUTE POWER AND UNQUENCHABLE LUST…

Today, King Archon entraps his wives in the crime of adultery, executing each boring bride to pursue his next infatuation. Most nobles overlook King Archon’s behavior, but when Lord Varick’s daughter falls victim to the king’s schemes, he vows revenge.

UNTIL THE COGSMITH’S DAUGHTER RISKS EVERYTHING FOR VENGEANCE.

When Aya Cogsmith is thirteen, King Archon has her father executed for treason. Orphaned and forced to turn to prostitution for survival, Aya dreams of avenging her father’s death. When Lord Varick approaches Aya with plans for vengeance, she agrees to play the king’s seductress—even though it puts her at risk for execution.

Packed with high-society intrigue, dappled with seduction, and driven by revenge, The Cogsmith’s Daughter is a steampunk dystopian novel with the perfect mixture of conspiracy and romance.